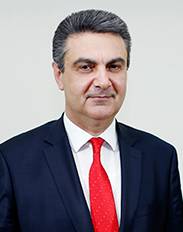 1993 Graduated from the Law Faculty of Moscow State University after Mikhail Lomonosov
1994-1999 General Director, organization “MIR”, import of goods
1999 Defended his thesis on “Problems of improving the system for the establishment, appointment and application of punishments”, received the degree of candidate of legal sciences, Mosvow
1999 – 2003 University of Geneva, Doctor of Jurisprudence – Criminal Law
2003 Defended doctoral thesis “Crime, Punishment, Law and Order”, received the degree of Doctor of Law (in consultation with Academician of the Russian Academy of Sciences V.N. Kudryavtsev), Moscow
1999-2010 President of the “Union of Advocates of Armenia”
2005-2008 Chairman of The State Examinations Commission of the Moscow New Law Institute
2006-2008 Chairman of the Qualification Commission of the Chamber of Advocates
2006 Founder of advocate firms “The First Advocacy” and “Golden Seven”
2008-2018 Director of the “National Institute of Standards” CJSC
2018 General Director of “Business Dialogue” CJSC
In 2009, 2013 and 2017 was elected a member of the Council of Elders of Yerevan, and in 2009-2017 was elected and re-elected Chairman of the Standing Committee on Legal Affairs of the Yerevan Municipality Council.
In 2010 and 2014 elected in Norway and re-elected in Brazil by 164 countries by secret ballot at the General Assembly of the International Organization for Standardization (ISO) as a member of the ISO Council and has been in Geneva as Member of Council from 2010 to 2017.

Doctor of law, author of 6 scientific monographs and more than 150 scientific and journalistic articles.

Participated at international congresses, conferences, assemblies in more than 80 countries ISO, CEN, IEC, ITU, CENELEC, UNECE, UN, ETSI, ISO, IQNet, EASC and was awarded the prestigious international organizations for his activities, signed Memorandum of Understandings (MoU) with 60 countries, including MoU with American ANSI and ASTM, received the title of top-manager of crisis situations, thank-you note and souvenirs from the collection of the President of the United States (Washington, USA, 2016).

According to the results of research and sociological survey by the Commission of international experts and the all-Russian quality organization on December 6, 2019 in Moscow, in the hall of ceremonies of the Russian Union of Industrialists and entrepreneurs (RSPP) was awarded the Golden order “Face of the country”.